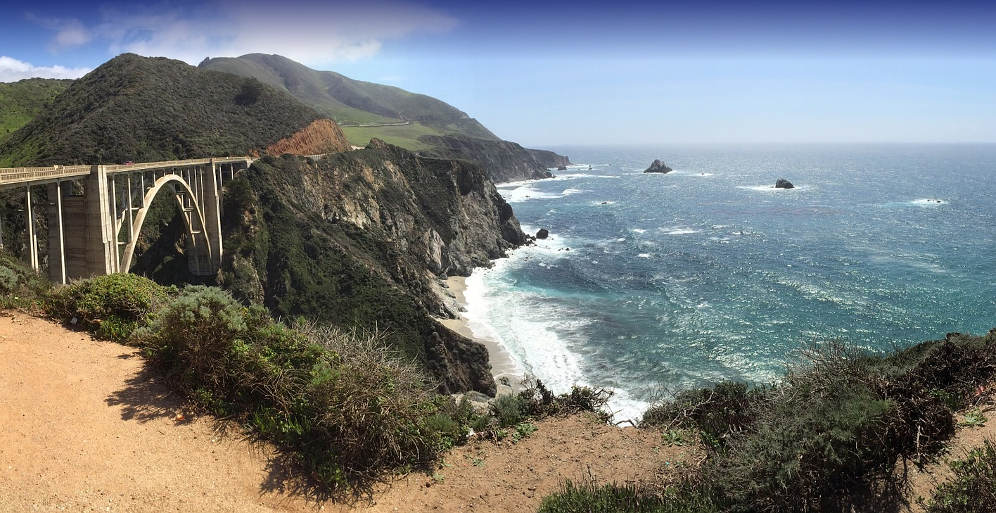 The coastline of California

With 840 miles (1350 km) of coastline, California has the third longest coastline of any state in the USA. But stretching almost 650 miles - over 1000 km - from north to south, it is a coastline that is very different in the north, towards the border with Oregon, compared to the southern coast that reaches down to the border with Mexico

Don't imagine that the sea off the California coast is warm – something like the coast of Florida or the Mediterranean. It is not. Many tourists have been more than a little taken aback to discover that on a warm summer's day the main seaward beaches of San Francisco are not packed with San Franciscans and vacationers splashing happily around in the waves. They are more likely to be shrouded in fog, and even when they are not, only the brave venture further than the waterline.
From the border with Oregon, down to as far as Malibu, even in the summer time the coastal waters of the Pacific Ocean are not warm.  Average water temperatures for July, the warmest month, are a tolerable  65.8°F (18.8°C) at Malibu, but down to 56.9°F (13.9°C) at Monterey, and just  55.3°F (12.9°C) at San Francisco.
By way of comparison the July average sea temperature at Atlantic City (NJ) is 74°F (23.3°C),  at Brighton (UK) it is 59.7°F (15.4°C), at  Nice (France) it is 73.6°F (23.1°C), and at Benidorm (Spain) it is 77.1°F (25.1°C).
Even in southern California, sea water temperatures do not get up to Mediterranean or US East coast levels. The July average for Santa Barbara, not far north of Malibu, is a brisk 62.1°F (16.7°C) while right down by San Diego and the Mexican border, the July average at the very popular Coronado beach is still only  67°F  (19.5°C).

The beaches and coast of Southern California 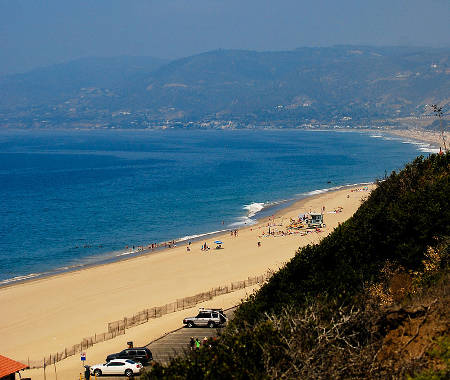 Malibu beach.
The coasts of Southern California are part of the California dream. From the Beach Boys to Bay Watch, countless bands, movies and sitcoms have put the southern California coast firmly on the world map. Although average water temperatures, even in July, are nowhere near Mediterranean levels, the summer sun can raise water temperatures quite a bit higher for a few hours in the shallows off long sandy beaches. And when summer air temperatures reach 90°F (32°C), cool sea water is refreshing.
The long sandy beaches  between Malibu and the Mexican border certainly attract the crowds; but apart from on the warmest sunniest days, only the hardy will go further than waist-deep into the waves, and those who do swim will not spend too long in the water.
But swimming is just one way to enjoy the ocean; there are others, starting with surfing. It is said that surfing, as a sport, began at Long Beach,  and today surfing has become synonymous with southern California, and surfing beaches dot the coast from Santa Barbara down to San Diego. Southern California's sunny ocean beaches great places for relaxing, beach walking, paddling, building sand castles and other seaside pleasures.

The beaches and coast of Northern California

Many of the beaches of Northern California are deserted for much of the time; few are reputed as good swimming beaches. One notable exception is the small beach at Heart's Desire  in Point Reyes cove, about 50 miles north of San Francisco, a long sea inlet in which the water can warm up to Mediterranean temperatures by late summer. But this is an exception; other beaches, exposed to the Pacific, are cool and relatively deserted. In addition, for much of the summer, they may be shrouded in coastal fog or low cloud.
Fog is a regular feature of the Pacific coastline in northern California, specially in summer.
Nevertheless, the beaches and coastline of Northern California have plenty of other attractions. Wildlife, such as sea birds and sea lions, is abundant; and long sandy beaches attract hikers, joggers and family outings.  Many of the beaches on the coast north of San Francisco are off the beaten track, down small side roads off the very scenic coastal road, Highway 1 (see California scenic routes). A trip up or down the northern part of Highway 1, between Leggett and San Francisco, is a trip to remember, as the highway hugs the coastline for most of the way.

Some special places to see on the California coast

Naturally, the California coastline has some special places, attractions that are worth making a detour to go and see.
Here is a selection of ten sites, from north to south

Driving the length of the California coast, following the coastal highways ( mostly Highway 1 ), is a journey of about 1000 miles (1600 km).   Allow at least 20 hours driving time, plus all the stops you will want to make.


Quebec - the north shore of the St Lawrence - Quebec's highway 132

The coasts of France