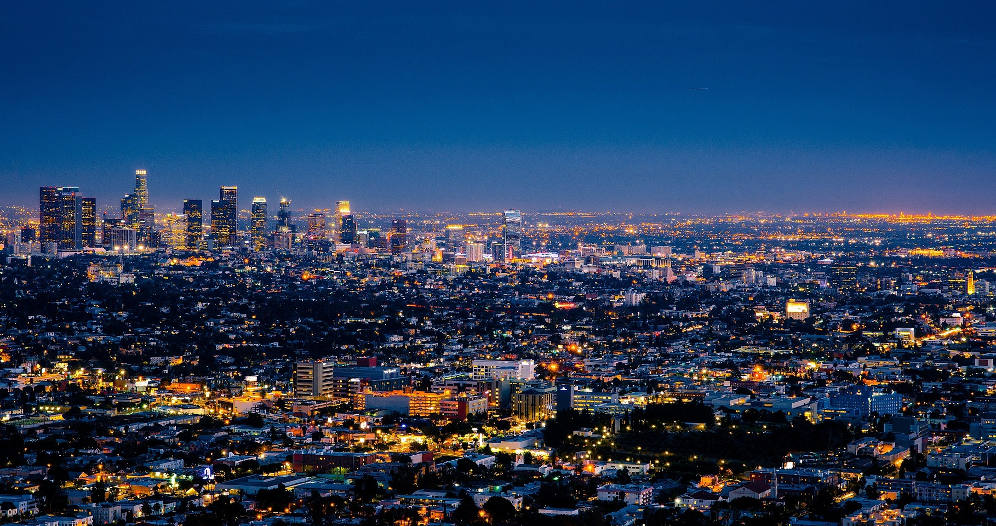 For most tourists and visitors, Los Angeles is the gateway to California.  And the gateway to Los Angeles is LAX  – "L-A-X" as it is commonly known – Los Angeles International Airport – one of the busiest airports in the USA, and the place at which each year tens of millions of visitors first set foot in the state of California.
It's a vast airport with nine different terminals, so not the kind of place to get lost in. The major US airlines have their own dedicated terminals, while most non-US airlines apart from Air Canada use the Tom Bradley International Terminal.
There are shuttle buses linking all the terminals and linking to the Los Angeles Metro Green line. There are also Flyaway buses connecting with Downtown LA, Long Beach, Hollywood and Van Nuys; but for most visitors to California the first port of call at LAX will be the car hire facility at "C Lot", where most rental car companies have their offices. Visitors are strongly recommended to book their rental car at LAX before arrival.

One thing needs to be made abundantly clear to international visitors before they reach Los Angeles; that is that LA is not a city like London or Paris or even New York, where you can just check into a hotel and then spend a few days wandering on foot or taking a short bus ride to visit the city's main attractions.
Visting LA on foot is out of the question. Doing so using public transportation is possible, but will take time even if you have a hotel in downtown LA; from downtown LA, you can get a metro train to Hollywood, to Universal studios, to Long Beach, to Santa Monica and (with a change) to LAX; but it's a twenty minute train ride from Union station (downtown) to Universal Studios, and 45 - 50 minutes on the blue line from downtown LA to Long Beach.
Staying in downtown LA and using taxis or public transportation to visit some of the city's attractions is fine, if you are flying in and flying out for just a few days; but for anyone else - if for instance you are spending a few days in LA as part of a longer trip to California - it will be easier to stay in a hotel near one of the attractions you plan to visit, and then travel from there by car.

Among Los Angeles' top and best-established tourist attractions is Disneyland Park– that is the first biggest and and original Disneyland, first opened in 1955. Today ity is part of the larger Disneyland resort, with numerous parks and attractions. Walt Disney originally wanted to build his theme park at Burbank, just next to Hollywood, but he could not find enough space. As a result, Disneyland is located in Anaheim, some 26 miles southeast of downtown Los Angeles.

Los Angeles also has a good collection of museums, the most prestigious of which has to be the Getty Center, in Bel Air - half an hour by car from downtown LA. - one of the leading museums in the USA.  The museum is stunning not just for its great art and photography collections, but also for its architecture and gardens. The car parking garage near the San Diego freeway is connected to the museum in a futuristic monorail hovertrain. Reaching the Getty center from Downtown LA by public transport is a long journey, taking over two hours.
As for specialty museums, two stand out  They are the Nethercutt Museum, one of the best historic automobile collections in the USA ;  located in the northern suburb of Sylmar, the Nethercutt is over half an hour by car from downtown LA, and an hour and a half by public transportation.
The Los Angeles Science Center is closer to downtown - about 15 minutes by car and  23 minutes by  bus. Among other aircraft and other exhibits, the most popular attraction is the Space shuttle Endeavour.  A three hundred meter walk takes visitors from the Science Center to the LA Natural History museum next door.

For a trip to the seaside, visitors have a choice. Beaches at Santa Monica to the west,  and  Long Beach are all directly accessible by metro from central LA, the Expo line (50 minutes) for Santa Monica and the Blue line ( 1 hour) for Long Beach.
At Santa Monica, enjoy the shops, cafés and amusements on the famous pier, or wander down the seafront for a mile and a half to Venice Beach, a popular hangout for young people, with its boardwalk, skating tracks, streetball players, buskers, and wannabees.
At Long Beach, away from the busy container port, the star attraction is the former Cunard liner Queen Mary, now a hotel and maritime museum.


In terms of population Los Angeles, with almost 4 million inhabitants, is Amerca's second city, after New York ; but in terms of surface-area it is the biggest metropolis in the USA.  It takes over an hour to drive on the freeway from the north to the south of  Los Angeles, and more like an hour and a half from east to west.

Visiting California by train ? No !

While parts of California have a  good public transportation system, visitors planning a trip should not imagine that they can hop on a train in Los Angeles and get whisked up to San Francisco in three or four hours. The train journey is possible - one through train a day - but it takes 14 hours.  California is a bit like Europe in many ways, but not yet as far as trains are concerned. A high-speed rail link from SF to LA is under consideration - indeed has been uner consideration for many years ; but in the best scenario, it is unlikely to materialize before 2030 at the earliest.
► More information :
More about California


Other places, other countries...

About Britain - a thematic introduction to Britain

About Quebec - Discover the French-speaking province of Canada