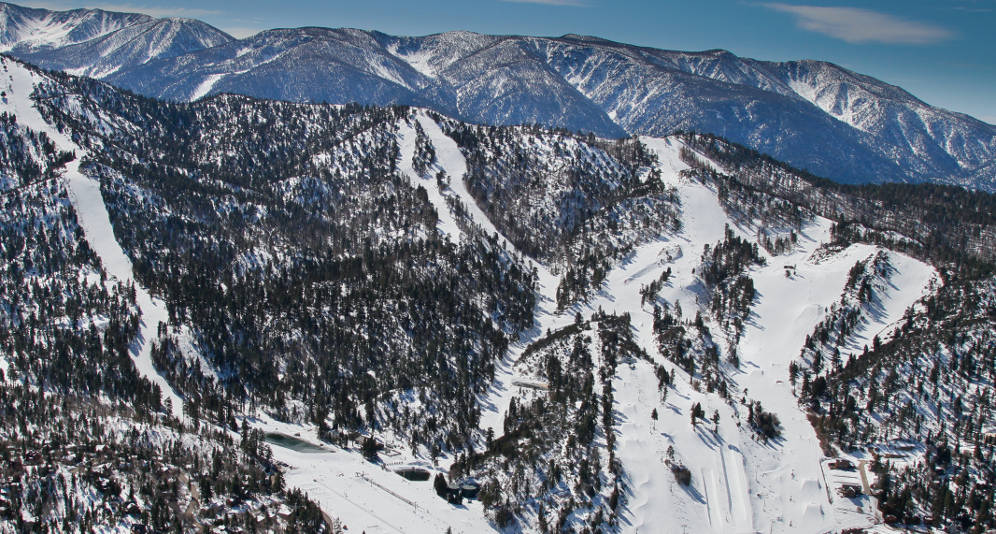 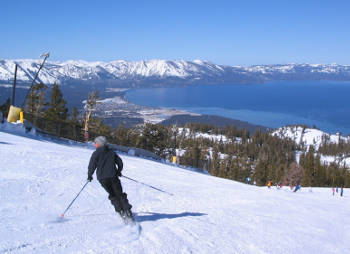 While the classic images of California mostly evoke life in a warm climate, another attraction of life in California is the proximity of the mountains. It's only an hours' drive from Los Angeles to the nearest ski resort at Mount Baldy, in the San Bernadino mountains. And for the inhabitants of the Bay area round San Francisco, it's a four-hour drive to the ski resorts around Lake Tahoe.
Apart from skiing, California offers plenty of opportunities for other outdoor winter sports, such as hiking, snow-shoeing or skating. Discovering Yosemite National Park, for instance, under a mantel of snow, can be an enchanting experience

Mount Whitney, in spite of its altitude, is not a place for skiing; a denuded rocky pinnacle in the Sierra Nevada, it is a magnet for experienced mountaineers and climbers, but not for skiers – or at least not ordinary skiers. Skiing on Mount Whitney is only for the highly experienced or for those looking for a severe adrenalin rush. There are no ski lifts.

The nearest ski resort to Mount Whitney, and one of the biggest ski areas in California (28 lifts and 150 trails) is Mammoth,  200 miles due east of San Francisco. With its 150 trails of varying difficulties,  its skiable area covering 3500 acres, and its generally abundant snowfall, it is a ski area that can remain open, in part, for up to eight months in the year, making it a very popular ski destination.  All in all, California has over 25 ski resorts, large and small. Most of them lie in the Sierra Nevada range but there are a few small resorts, nonetheless resorts with gondolas and ski-tows, in the San Bernardino mountains.

The resorts most accessible to people from Los Anglese are the four that lie in the San Bernardino Mountains, all of them within two hours' drive from Central Los Anglees. The nearest to LA is Mount Baldy with 4 lifts and 26 trails; the most extensive is Mountain High, at Wrightwood, with 14 lifts and 59 trails - some of them floodlit for night skiing.

There are a number of ski resorts located in the Yosemite National Park and the Sequoia National Park.  With its 150 trails, the resort at Mammoth / June Mountain is one of the biggest in California: however it is well away from any Interstate highway, and getting there from San Francisco by car takes at least five and a half hours... and longer if there's snow on the road.  Much smaller, but only 4 hours from San Francisco, is the Yosemite ski and snowboard area at Badger Pass, a family-style resort.  The closest ski resorts to San Francisco, though not the most easily accessible, are at Dodge Ridge (just under 3 hours) and at Bear Valley (3½ hours). From Sacramento, Dodge Ridge is about 2½ hours by road.

Skiing above Lake Tahoe
The largest concentration of ski resorts in California ski is to be found in the northern part of the state, in the vicinity of Truckee and Lake Tahoe. Easily accessible from Interstate 80, resorts at Royal Gorge, Soda Springs and Sugar Bowl are just over 2½ hours up the interstate from San Francisco, and can also be reached in about 20 minutes from the airport at Reno, Nevada. Sugar Bowl is a substantial ski area, with 13 lifts and 102 trails, though it is not as substantial as nearby Squaw Valley, between Truckee and Tahoe City.  With 29 lifts and 170 trails, Squaw Valley is one of the biggest ski resorts in the USA;  the longest gondola takes skiers right to the top of Mount Lincoln, at an elevation of 8383 ft (2555 metres), from which there are trails back down for intermediate and advanced skiers... and, on a clear day, some fabulous views.

One of the great features of California is that even when it gets too hot in summer, the mountains are not too far away. It is often possible to see snowy peaks from Los Angeles, and while the mountain areas of California provide great opportunities for all kinds of outdoor activities in summer, in winter they offer a good choice of destinations for winter sports - downhill and cross-country skiing, snowboarding, snow-shoeing and more.


Among the lesser-known facts about California is that it boasts both the lowest point in North America - Badwater basin in Death Valley, 282 ft (86m) below sea level - and also the highest point in the contiguous 48 states, Mount Whitney in the Sierra Nevada, 14,505 ft. (4,421 m) above sea level. Mount Whitney is not quite as high as the Alpine summit of Mont Blanc, but not far off.
More winter sports guides