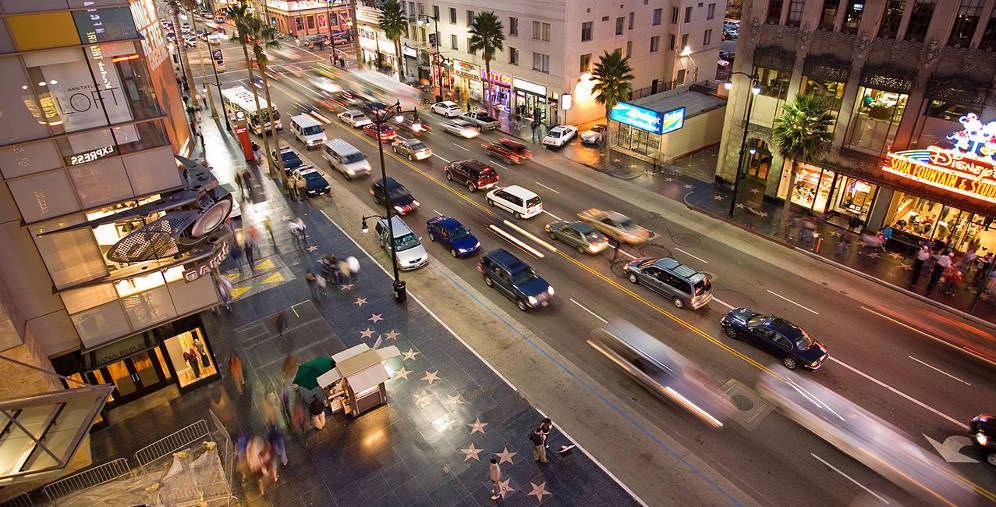 Once upon a time, Hollywood was just a bit of empty land not too far from Los Angeles.     That was over 100 years ago. At  the start of the 20th century, America's movie industry was based  in New York; but very soon fledgeling movie-makers, working in an innovative and risky business, found that everything in New York was too expensive for them; workers, land, taxation. In addition, there was also the problem that movie-making in New York was a seasonal activity; you couldn't make movies outdoors  in winter, because it was too cold and there was often snow on the ground.
By 1905, when the Union Pacific railroad completed a direct rail link from Chicago via Salt Lake City, the journey time from New York to Los Angeles had come down to about four days, trains were comfortable, and the first sleeping car services were in operation. So to keep on filming in the winter months, movie-makers made the trip west, and found a place where they could make films throughout the year. And as an added incentive, everything in California was cheaper - including land and labor. And there was lots of land available.
Before long, a number of movie-makers decided to abandon New York altogether and set up permanent facilities at the foot of some small hills just outside Los Angeles in an area called Hollywood.  After that, the rest, as they say, is history.

Hollywood accommodation from Hotels.com – Best online rates, pay now or later on most rooms, free cancellation on most rooms

How to get to Hollywood:

From LAX - Los Angeles Airport.  Cheapest solution, just $8 . Take the non-stop Flyaway Bus from outside any terminal. Buses run every hour, and the journey takes about an hour. Tickets may be bought on the bus using visa or mastercard, or online here .
From Downtown Los Angeles - A twenty-minute metro train trip (red route)

Central to any discovery of Hollywood, and the first must-do, has to be a walk, on foot, along the central stretch of Hollywood Boulevard, known as the Walk of Fame. This is Hollywood's tribute to it's own, and in true Hollywood style, the tributes are not just to the dead and famous, but to living Hollywood icons too.  Walk slowly down the sidewark, and spot the stars you know... They're all there, over 2,600 of them, from historic figures like Charlie Chaplin (by 6751 Hollywood Bvd.), through iconic musicians such as John Lennon or Janis Joplin, to contemporary stars like Johnny Depp.. as well as a load of B-movie stars that you are liable to have never heard of.
You can spend hours on, and just off, Hollywood Boulevard, with its shops, theaters, Madame Tussauds, the Museum of Death (only in Hollywood !), restaurants, fast food outlets, and lots more.
To go further afield, take the hop-on hop-off bus,  hire a bicycle or join a tour and head on up to Beverly Hills to admire the fabulous mansions of the stars and the movie moguls. Don't expect to catch a glimpse of someone really famous. It can happen, but the mansions of Beverly Hills are set in their private grounds, behind protective hedges and fencing.
Beyond Beverly Hills, it's another seven miles (12 km) to the seaside at Santa Monica, Hollywood's closest beach. The sea front is liable to be packed with visitors on a warm sunny day, specially at weekends. The pier, with its amusement park, aquarium, ferris wheel, shops and restaurants is a big attraction.

The second must-do is a Hollywood studio visit.  There are three working Hollywood studios that offer tours; Sony - formerly MGM - (in Culver city), Paramount (in Hollywood) and Warner Bros (in Burbank).  In addition, you can visit an actual studio at Universal Studios;  Universal Studios, located at the edge of Burbank, is one of Los Angeles' most popular attractions, is actually a movie theme park, but it does include the Universal studios too.
Driving from Hollywood to Burbank, you will drive below the iconic white H O L L Y W O O D sign, on a hilltop in Griffith Park. Also on a hilltop in Griffith Park is the Griffith obsevatory, which is well worth a visit. On the one hand it offers great views over Los Angeles, and also to the Hollywood sign, and is very popular with photographers. On the other hand the Observatory is also a free science museum, devoted to astronomy and the stars (but not the Hollywood kind of stars). One word of warning; there can be traffic congestion at weekends. 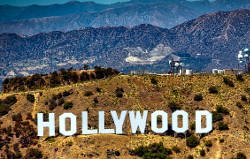 Even more than the stars on the Walk of Fame, there is one image that epitomises Hollywood, and it's the white H O L L Y W O O D sign on the hillside above the city. You can't actually visit the sign. It's in a protected area surrounded by wire fencing. The best place to view the sign from is from close to the observatory at Griffin Park.

Once Hollywood was mainly about movies and TV; now it's about movies, TV and tourism. The central Hollywod area is compact enough to be visited on foot, and there are tour buses and public transportation to get visitors to places slightly further afield. If you want to "do" Hollywood, you can easily spend three days here without seeing everything there is to see.

About Britain - A thematic introduction to Britain