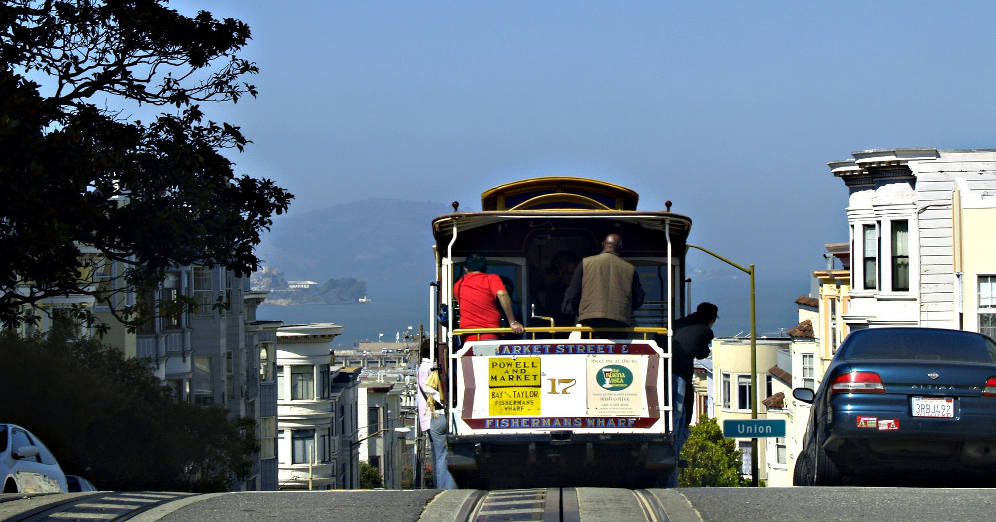 If you're going to San Francisco....

... there's no need to wear flowers in your hair.  Not these days.
California's second city has long attracted visitors, immigrants and tourists from further east, and from further west; but it was in the 1960s, at the height of the Hippy and alternative movement that modern San Francisco established itself firmly as a world-class tourist destination.
And why not ? On any list of cities in North America with a distinctive character, San Francisco has to feature in the top three or four, along with New York, Boston or Quebec; many people put it top of the list .
As the Hippies discovered half a century ago, San Francisco has it all... of at least a good deal going for it. A distinctive character, lots of history (in spite of its historic earthquakes), a mild climate, lots of sunshine, and plenty to see an do. And with its historic streetcars, its a city that is fun to travel round

You can spend a week visiting San Francisco, and you won't have a bored moment. Ride the cable cars, visit a submarine at Pier 45, visit America's original Chinatown, enjoy the markets and attractions at Fisherman's Wharf and Pier 39, wander slowly down (or up) the twisting and turning Lombard Street and past the characteristic wooden houses of old San Francisco... and that's just for starters, without leaving the downtown area.
A bit further and there's Alcatraz, the historic prison set in a fortress in San Francisco Bay, accessible by boat trip; and of course the world-famous Golden Gate Bridge, which you can either travel across, or else just view from the Presidio, a two mile walk from the city center or a short trip by car.

The heart of San Francisco is the area in the top right corner of the San Francisco peninsula, between Market Street and the wharfs alonside the Embarcadero. This is historic San Francisco, an area that can be visited on foot, by hop-on-hop-off bus, by cable-car, streetcar or by tour bus.
Perhaps the most interesting way to start your visit of San Francisco is to take the Powell-Hyde cable-car from Powell Market as far as the top end of Lombard Street: this street is one of the  iconic parts of old San Francisco, where the slope is so steep that the road snakes downhill in a series of S-bends, between attractive town-houses on either side. You can pick up the Mason-Powell cable-car four blocks down, on Columbus Avenue, to return to Powell Market, or make your way down from there to the Embarcadero, half a mile further on.
Once the port where hundreds of ships would be tied up, the Embarcadero is now a wide pedestrian area along the waterfront, popular with San Franciscans and tourists alike.
The main section of the Embarcadero runs from the Ferry building marketplace in the southeast, to Fisherman's wharf in the north. Beside the Ferry Building marketplace, with its farmers' market, is the free San Francisco Railway museum, with its collection of historic cable cars. Heading northwest along the Embarcadero one then comes to the Exploratorium, a hands-on museum of science, art and human perception. Further up, as the Embarcadero swings round to the west, comes Pier 39, an busy and attractive shopping area but also a place to watch the sea-lions that have take up residence in this part of San Francisco's old port. Just beyond Pier 39 you come to the heart of Fisherman's wharf, where the attractions include the USS Pampanito, a decommissioned World War 2 submarine, and the Musée Mécanique, a museum of historic arcade game machines. Entry to the museum is free, and visitors can play, using their own money, on the historic machines. Almost opposite the Musée Mécanique is Madame Tussaud's.
Just beyond Fisherman's Wharf is is the Hyde Street Pier and the Aquatic Park. This area is home to the San Francisco Maritime National Historical Park, with its collection of historic ships and maritime museum.
The length of the Embarcadero is served by the historic F Market and Wharves Streetcar line. This heritage line, while part of the San Francisco urban transit system, operates a fleet of historic streetcars from San Francisco, other US cities, and other cities as far away as Blackpool (UK), Osaka (Japan) and Melbourne (Australia).

A visit to central San Francisco would not be complete without a trip to the historic Chinatown.  San Francisco was the first US city to have a Chinatown, being not only a major Pacific trading port, but also the port of entry for tens of thousands of Chinese laborers who came in the late nineteenth century to work on the new railroads that were opening California up to the rest of the USA.  Today, the San Francisco Chinatown is the most well-established, and the second biggest Chinese quarter in any North American city. With 15,000 inhabitants in an area of about an eighth of a square mile, it is also the most densely populated part of the United States after Manhattan.
Chinatown lies some 700 metres west of the Ferry building market; the Powell-Hyde and Powell-Mason cable-car lines run along Powell Street, which marks the western edge of Chinatown.  The Cable-car museum on Mason St. is also on the edge of Chinatown


Coit Tower - on Telegraph Hill, just south of Pier 35 on the Embarcadero. Stunning 360° panorama around San Francisco and the bay. A must for photographers.
The Golden Gate bridge
Alcatraz island and historic jail (boat trips from Pier 33 on the Embarcadero)
The San Francisco Museum of Modern Art, on 3rd St. (see art galleries). A great  modern art museum with a collection of European and American artists from the 20th century onwards.  Tickets (normal rate) 25$


California's second city is one of the most attractive and distinctive cities in North America. Standing on a peninsula between the Pacific Ocean and San Francisco Bay, a magnificent natural harbor, San Francisco is the pearl of the US west coast.

While Los Angeles is the main gateway to California, San Francisco is also directly accessible by plane from all over North America, but also by direct flights from London, Frankfurt, Tokyo, Beijing, Paris, Toronto and other world cities.

San Francisco's top attractions, packaged into one convenient pass, valid for up to 9 days.
Click for details
► More information :
More about California

About Britain - New; a thematic introduction to Britain

About Quebec - the only French-speaking province in North America


Photo top of page by Werner22brigitte