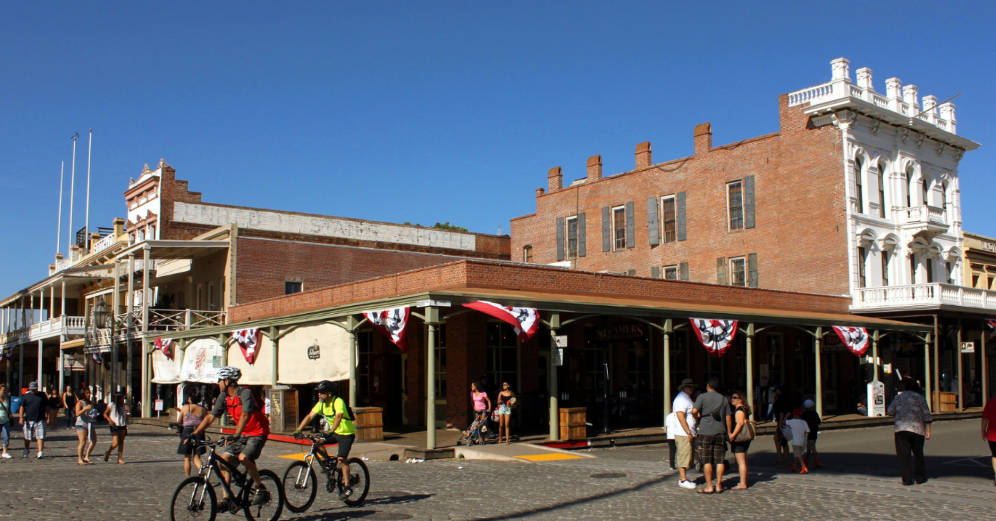 Sacramento ? Where's that ? Many visitors from outside the USA, and even from other parts of the USA, presume that the capital of California is Los Angeles, or if not Los Angeles, then San Francisco. But then many people imagine that the capital of New York state is New York, which it isn't. It's Albany... even if you've never heard of it.
Before California was ceded to the United States by Spain, the capital of all the Californias (Baja California, now part of Mexico) and Alta California (now just California) was Monterey, on the coast. Following incorporation of California into the US, the capital moved three times before finally being established in 1854 at Sacramento. The choice was logical; Sacramento was close to the main entry to California from the landward side, and was a key staging post for gold miners and other settlers moving into the state. In addition, Sacramento is connected to the coast by the Sacramento river, the largest river in California, navigable for over 250 miles.


While Sacramento does not attract as many visitors as Los Angeles, San Francisco, or even San Diego, it is a city that is well worth visiting by anyone wanting to fully discover California. After all, it is the state capital, and has been so for over 160 years.
It is easy for visitors to imagine that California's cities lie on or close to the coast, and that the rest of California is made up of agricultural land, forests, deserts and mountains. Most of it is, but there are also plenty of middling to small towns, and three big cities, Fresno, Sacramento, and Bakersfield.

Sacramento is California's oldest city – at least in the sense that it was the first place in American California to be officially incorporated as a city, back in the year 1850. Although nearby San Francisco had developed into a bigger town and the biggest port on the west coast of North America, it was not incorporated as a city until 1856, six years after Sacramento.
Sacramento is thus the Californian city that most prides itself on history; and even if its history is rather short in comparison to other historic US cities like Philadelphia, Boston, Charlotte or New Orleans – let alone in comparison to the historic cities of Europe or Asia – Sacramentois a place with history, and it likes to show it.
Sacramento's history is the history of modern California. The area in which Sacramento is located was first explored by the Spanish cavalry officer Gabriel Moraga, who gave the Sacramento river its name. The first settlement, called New Helvetia, was established by Swiss pioneer John Sutter, who appreciated the area's potential for agriculture. Soon the township's population exploded following the discovery of gold in a nearby river, and the start of the California Gold Rush; and before long the Central Pacific railroad arrived, first from the San Francisco bay area, then connecting across the Rockies towards the east and a junction with the Union Pacific, to create the first transcontinental railroad, opened in 1869.
Already the state capital, Sacramento was thus from then on and for years to come, the hub of traffic between California and the rest of the United States.

Today it is Sacramento's historic heritage that draws in the visitors. The biggest attraction is Old Sacramento State Historic Park, between I Street and K Street, a preserved and rejuvenated area that covers about a third of the historic area of Old Sacramento, on the east bank of the Sacramento river. The historic park area is essentially composed of nineteenth-century buildings, built in the classic architectural style of the American West, a form of utilitarian American architecture embellished and adapted for a hot climate with balconies and impressive facades involving features of colonial Spanish style.
The historic park is an open air museum, and many of the buildings now in it have been relocated from other sites. They include the famous Big Four House, made up of the former Sacramento headquarter buildings set up by pioneering railroad tycoons, Huntington, Hopkins, Stanford and Crocker. Another significant building is the former Pony Express Terminal, a.k.a. the B.F.Hastings Bank building, that now houses part of the Wells Fargo museum.
For visitors wanting to get a real understanding of California's history, Old Sacramento is the place to do so, as it is also home to the California State Railroad Museum (see theme parks and museums), the State Military Museum, and the Sacramento History Museum. There are even historic train rides that depart for a short trip up the river bank from the former Central Pacific Railroad station. On the river itself, the most popular sight is the historic sternwheel riverboat, the Delta King, which is nowadays a floating hotel and restaurant.
At the southern end of Old Sacramento, Sacramento's Tower Bridge, a vertical-lift bridge across the Sacramento river, is anaother building registered as a historic monument, opened in 1935.
Within easy walking distance of Old Sacramento is the Crocker Art Museum (see Art Galleries), and a bit further south is the California Automobile Museum. It is a twenty-minute walk, down Front Street,  from the center of Old Sacramento to the Automobile museum.
A half hour walk from Old Sacramento, past the State Capitol Building and museum, lies Sutter's Fort state historic park. This is the site of the original settlement in Sacramento. The fort's main building, dating from 1841, is the oldest building in Sacramento, and was the original  home of Sutter's first colony.

Sacramento International airport has direct flights to a good number of cities in the USA, but for visitors outside the USA, there are no direct flights to Sacramento, except from Mexico. One solution is to take an intercontinental flight directly to San Francisco, a litle over an hour's drive away: alternatively fly to another US international airport, and take a connecting flight.

Sacramento accommodation from Hotels.com – Best online rates, pay now or later on most rooms, free cancellation on most rooms

About Britain - New; a thematic introduction to Britain

About Quebec - the only French-speaking province in North America


Photo top of page by Prayitno.
Licenced under Creative Commons 2.0