About-California.com
a short guide to California

Bodie - Where the west was once wild

If you want to recapture the spirit of the Wild West, one of the more interesting ways to do so is to take a visit to Bodie, once a Gold Rush town high up in the mountains on the border between California and Nevada.
Bodie is one of the great "ghost towns" of the American West, and one of the largest. The town, which was an active mining community from 1860 to 1942, enjoyed a short five year period as one of the Gold-Rush boom towns of the Wild West, when it was reputedly the second largest town in California, and a town that was so lawless and violent that it's name was known all over the USA.
Today it's a ghost town, a California State Historic Park and a National Historic Landmark.
Largely abandoned since the 1940s, part of the town, comprising some 110 mostly wooden buildings and an old stamp mill,  is today preserved in a state of "arrested decay", a collection or long-abandoned homes, shops and other buildings from the late nineteenth and early twentieth centuries.
The site is open all year, though in winter may be accessible only on skis. During the summer months, from May to September, visitors can tour the stamp mill, and learn how gold was extracted and processed.
Located in eastern California, over 100 miles south of Lake Tahoe, and almost on the border with Nevada, the site lies at an altitude of over 8,000 ft – in a wild and desolate landscape, very cold in winter, hot in summer, and arid in all seasons.The site is best visited between May and September

In 1859, a gold prospector named William Bodey (pronounced Boe-di) discovered gold-bearing rock in this inhospitable part of the California desert. Claiming the stake, he and his two fellow prospectors established a base cabin on the spot, hoping that they would soon be very rich men. Alas it was not to be.
As winter was fast approaching,  Bodey and one of his companions promptly set off to buy provisions to tide them over the coming months; the nearest store was at Monoville twenty miles to the south. They bought the provisions all right, but unfortunately on the way back to their claim, they got overtaken by the first serious snowstorm of the winter. Valiantly they trudged on, until they had almost made it back to their claim, when Bodey collapsed ; his companion went to find help, but by the time he returned, snow had covered all their tracks, and Bodey could not be found. His corpse was not located until the snows melted the following spring.
As a tribute to William Bodey, the place where the prospector had staked his claim was named Bodie, Bodey's companions changing the spelling to fit the pronunciation, as they reckoned that a town called "Bodey" might sound a bit morbid. 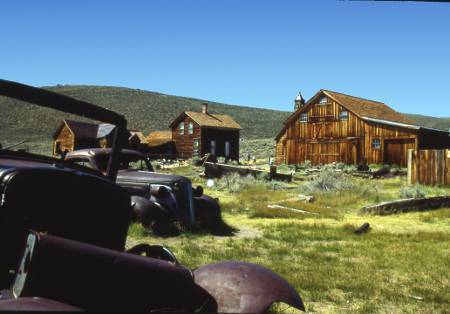 Once this was one of the wildest places in the Wild West.
Mining at Bodie was actually not very productive until in 1876 the Standard Company discovered a rich gold-bearing lode, that rapidly transformed Bodie into one of the great Wild West Gold Rush boom towns. However like many Gold Rush towns, Bodie enjoyed just a short sharp heyday, lasting less than ten years. During that time the town had up to 10,000 inhabitants, mines, mills, shops, a newspaper and up to 65 bars – all the essential infrastructure of a town of its time. It was reputed to be one of the most lawless towns in the Wild West. Yet by 1880 the decline had already begun, but Bodie remained an active mining town. By 1892, it had a railroad and even a mill powered by electricity provided from a hydro-electric plant 13 miles away.
However by 1910, fifty years after William Bodey staked his claim, the town's decline had become unstoppable, and its population had fallen below 1000. The last mine, and the town's post office,  closed in 1942.

Bodie is in Mono County, almost on the border with Nevada
It is about 50 miles by road from Yosemite National Park
Bodie is about 7 hours drive from San Francisco, and a bit over three hours from south Lake Tahoe.

The nearest small town to Bodie is Bridgeport. Check out best rates for ► hotels in Bridgeport
For rural accommodation close to Bodie (10 miles) , check out the lodge (with restaurant) at Virginia Creek settlement

The closest resort to Bodie, with ample accommodation, is ► South Lake Tahoe

About France - a thematic guide to France. Over 200 pages of information for visitors and students.

About Britain - A thematic introduction to Britain for visitors and tourists

About Quebec - A historic part of North America that really is different from the rest.