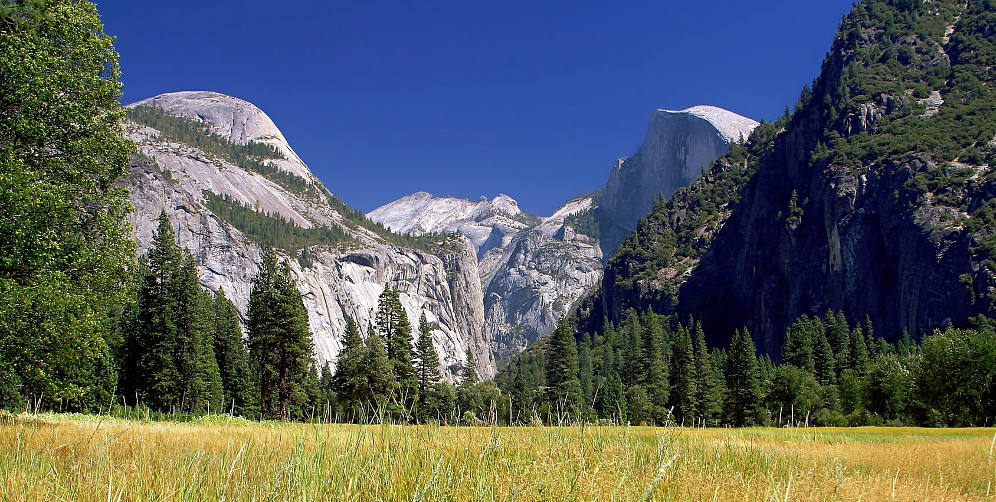 Yosemite was not the first National Park in the USA; that was Yellowstone. Yosemite gained park status in 1890, making it one of the oldest nature reserves in the United States. Yosemite is one of 12 UNESCO Natural World Heritage Sites in the USA, and one of two such sites in California (the other being Redwoods national and state parks)


Located in the Sierra Nevada mountains, almost four hours drive due east of San Francisco, Yosemite National Park is loved and renowned for its forests and rocks.  It is home to some of the mightiest  giant sequoia trees in the USA, to some of the highest waterfalls in the USA, and to spectacular sheer granite cliffs, most notably El Capitan and the Half Dome.

There are five accesses to Yosemite National Park, four on the western side, and one on the east. The busiest entrance and the one most easily accessible from San Francisco is the Big Oak Flat entrance, on Highway 120.
Highway 120 runs through the park area, exiting at Tioga Pass, near Mt. Dana, which is the eastern entrance to the park, close to Mono Lake.
The least busy entrance is at the Hetch Hetchy entrance, giving access to the wilderness area around Mather in the north of the National Park.
The most interesting entrance to Yosemite is the Arch Rock Entrance on Highway 140, from Mariposa and Incline, that brings visitors in under Arch Rock, a natural tunnel, and past El Portal.

Yosemite hotels from Booking.com – best rates at a choice of accommodation in and close to Yosemite. Includes hotels, B&Bs and lodges. Free cancellation options, no booking fees.

Yosemite accommodation from Hotels.com – Best online rates, pay now or later on most rooms, free cancellation on most rooms

Yosemite is above all a recreation area. While it is quite possible to come for the day, drive round, see the sights and drive out again before nightfall, visitors who do this will miss out on a big part of the Yosemite experience. The best way to appreciate Yosemite is to spend at least a couple of days in the park, and experience it to the full. Yosemite is a paradise for camping, hiking, cycling, enjoying nature, photography, backpacking, and mountaineering. In addition, there are opportunities for fishing, horseback riding and golf, as well as winter sports, including downhill and cross-country skiing and snowshoeing.

Yosemite Falls, at 739 metres (2,425 ft), constitute the twentieth highest waterfall in the world, and the third highest in the continental USA. However the falls are off the main Yosemite valley, and to get a good view of them means hiking up into the hills. Consequently, Yosemite's best known waterfall is the the Bridalveil Fall, a "mere" 189 metres (620 ft) in height, but conveniently situated beside the Yosemite valley road opposite the cliffs of El Capitan.

There are a number of places to stay within the National Park, including guest lodges and campgrounds.

Not to be missed, just beyond the eastern exit from the Park via Highway 120, is the amazing Mono Lake. The water in this lake is so saline that it cannot support normal aquatic life. it is home however to remarkable little shrimps that have learned to adapt to the very harsh conditions.

Yosemite - One of the most distinctive landscapes in North America.
Pronounced : Yo-semity

With 4 million visitors annually, the National Parks Service needs to manage access to Yosemite. As with other popular National Parks, there is an entrance fee - currently 30$ per car for a 7-day pass. An annual pass costs 60$.  For anyone planning to visit more than one paid-entry national park or national area in a year, the America the Beautiful annual pass, costing 80$, is the best solution
► More information :

About Britain - A thematic introduction to Britain

About Quebec - Discover Quebec, the only French-speaking are in North America